Although making seeds is easier than breeding, collecting and storing pollen is an essential skill that all aspiring breeders must master. Whether you are a future cannabis breeder, a hobby pollen chucker or you’re just reading this for “educational purposes”, welcome!
In this tutorial, we are going to go over how to successfully harvest and store pollen from both cannabis males and reversed females.

If you want to do this seriously and create your own stable cannabis strain, it is paramount to learn the basics of cannabis breeding. However you may also want to make seeds just for fun which is fine too. Let’s delve into it! 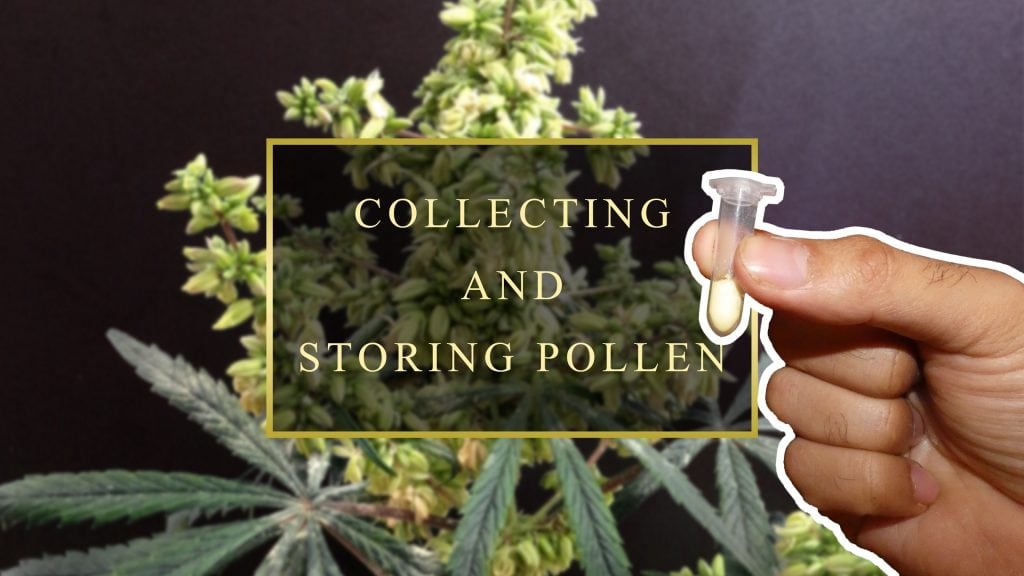 Collecting and storing pollen from a male plant is often easier than harvesting feminized pollen.
Male cannabis plants can produce copious amounts of pollen. Furthermore, a little bit of pollen goes a long way so you will just need a small amount of it to make hundreds of seeds!
The best time to collect male pollen is usually about 1 week after the first flowers begin to open. Keep in mind that this is strain specific so it can vary greatly.

What you need to get started:

Because humidity destroys pollen viability by causing the pollen spores to germinate, the environment has to be very dry. If the Relative Humidity is over 45%, it will be paramount to use a dehumidifier.

Pollen grains are invisible so make sure that you are collecting your pollen in an airtight room or a room far away from your flowering females.

Step 1: Place the male plant above the table with a sieve between the table and the plant. Male cannabis flowers are very moist and this can ruin the viability of your pollen.

Step 2: Gently shake the male clusters above the sieve. The pollen should end up on the table and the male flowers should remain trapped in the sieve. Remove all foliage remnants and male flowers from the pollen powder using your tweezers. 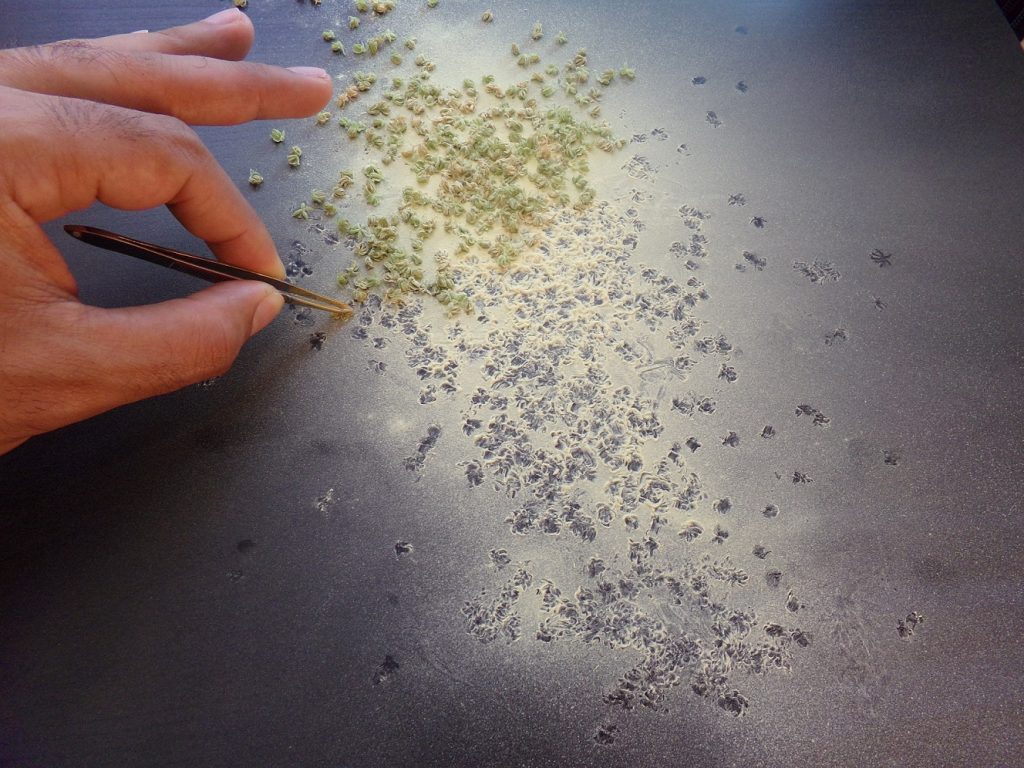 Step 4: Collect the pollen from the table using a plastic card. Slowly push it onto a sheet of paper previously folded in the middle.

Beware! Always thoroughly spray yourself with water as soon as you leave the room. Pollen grains are tiny and after collecting pollen, your clothes will be full of invisible pollen spores. It is very easy to contaminate your female plants that way.

After waiting for 12+ hours, gently poor the pollen into your airtight test tubes and store them in a fridge.
This pollen should remain viable for 3 to 6+ weeks that way. This method is great whenever growers want to stagger the pollination of their female plants.

Use an airtight glass jar with a couple of silica gel packs in it. Poor the pollen into a small paper pouch and place the paper pouch into the glass jar. After about 48 hours, you can then mix up the pollen with dry cooking flour (1 part pollen / 1 part flour) and fill up your test tubes.
Finally, the test vials can go straight to the freezer.
Always let the tubes come near room temperature before opening them so as not to draw warm moist air. When done properly, you can store pollen for several years using this method.

Harvesting pollen from reversed females is a similar process though it is often trickier. Not all female cannabis plants can be reversed. Some will produce male flowers devoid of pollen, some will produce male flowers with tiny amounts of feminized pollen and some will give male flowers with good amounts of pollen.
Reversed females almost never produce as much pollen as male plants.
For that reason, instead of shaking the clusters above a sieve, it is better to pluck the mature male flowers one by one and tap them against the table using tweezers. By doing that, the small amount of pollen trapped in the flowers should fall off onto the table.
You can use a black table in order to see how much pollen these reversed flowers contain. 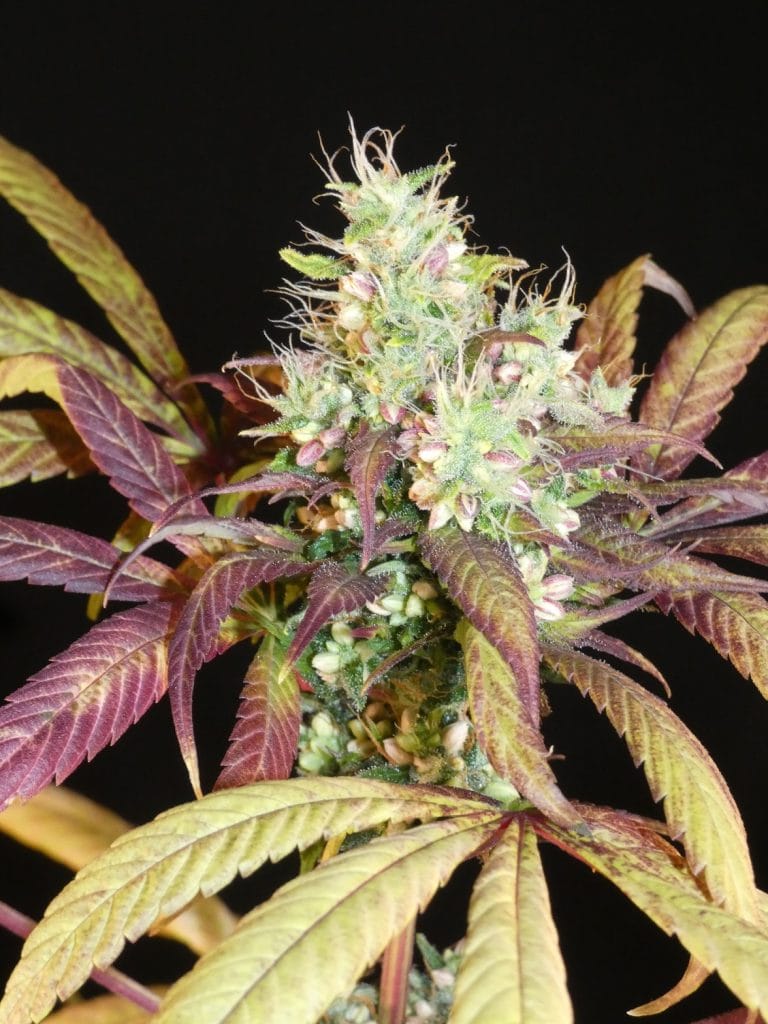 Although it is possible to store pollen for a long time, these tiny spores are very sensitive to temperature variations and humidity. The pollination may work very well but it can also fail. Pollinating your cannabis plants using fresh pollen is a sure-fire way to get lots of seeds.